What a wonderful weekend!  It started with a phone call from my Phi Mu sister Rachelle sharing the news that she and David are engaged, and ended with a call from my dad sharing the news of his engagement to Sherry!  I am so happy for all of them and excited for the celebrations to come!
More weekend fun included a batch of cinnamon ice cream, pool-side Food & Wine magazine reading, a drink with Andrea and Gabe at the new Virtue Feed & Grain in Old Town Alexandria, and a quick cleaning of our apartment.  So maybe cleaning isn’t the most thrilling, but I sure felt good when it was done! 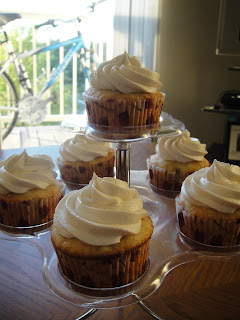 These banana cupcakes are perfect for a special celebration (like an engagement) or just for fun!  I made them last weekend to share with my in-laws in Pittsburgh and a few coworkers.  The recipe makes two dozen cupcakes, so there were plenty to go around!  I used a basic vanilla frosting, but they would also be delicious with a peanut butter frosting or the vanilla pastry cream that Michelle uses in the original recipe on Brown Eyed Baker.
And don’t worry dad – I’ll make something banana-free for you!
Banana Cupcakes
Makes 2 dozen cupcakes
2 ¾ cups all purpose flour
2 teaspoons baking powder
½ teaspoon salt
½ cup unsalted butter, at room temperature
¼ cup vegetable shortening, at room temperature (non-hydrogenated!)
1 ¾ cups granulated sugar
2 teaspoons vanilla extract
2 eggs
2 large ripe bananas, mashed (about 1 cup)
½ cup milk
Preheat the oven to 325°F and line two standard cupcake trays with paper liners.
Sift the flour, baking powder and salt in a medium bowl and set aside
Cream the butter, shortening, and sugar in the bowl of a stand mixer for 3-4 minutes until light and fluffy.  Scrape down the sides of the bowl, and add the eggs, mixing well after each addition.  Mix in the vanilla and the bananas.
With the mixer on low speed, add the flour mixture and the milk alternately, beginning with one third of the flour mixture and one half of the milk; repeat; then finish with the last of the flour mixture.
Divide the batter evenly among the two cupcake trays.  Bake in preheated oven for 20-25 minutes until a toothpick inserted into the middle of a cupcake comes out clean.
Transfer the cupcakes to a wire rack to cool.  When cool enough to handle, transfer the cupcakes from the trays to the wire racks to cool completely.
Frost the cupcakes with vanilla frosting (recipe included below).
(Cupcake recipe adapted from Brown Eyed Baker)
Vanilla Frosting
Makes enough to frost 2 dozen cupcakes
½ cup unsalted butter, at room temperature
½ cup vegetable shortening (non hydrogenated), at room temperature
12 ounces powdered sugar, sifted
1 tablespoon vanilla extract
2 tablespoons whole milk
Place the butter and shortening in the bowl of an electric mixer fitted with the whisk attachment.  Mix the butter and shortening until very light and fluffy,3-4 minutes, scraping down the sides of the bowl once.  Add the powdered sugar, one fourth at a time, mixing until well incorporated after each addition.  Add in the vanilla and milk, and continue mixing for another minute or so.
Transfer the frosting to a pastry bag fitted with a large pastry tip (or a gallon-sized freezer bag with one bottom corner snipped off) and frost the cupcakes generously.   Taste one for yourself, and then share with friends!
Posted by Unknown at 10:34 PM

Email ThisBlogThis!Share to TwitterShare to FacebookShare to Pinterest
Labels: Cupcakes