Thanks to a tweet by the Pioneer Woman earlier this week about a recipe from Recipe Girl, we had a deliciously sweet breakfast this morning. 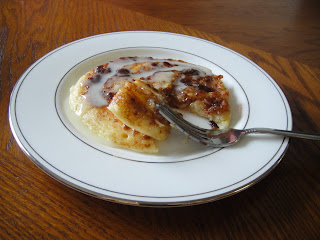 This recipe starts with a basic pancake batter, but while they are cook on the griddle, you swirl a sugary, cinnamon-y, buttery filling on top.  When you flip the pancake, the underside melts into the pancake and caramelizes as it finishes cooking. 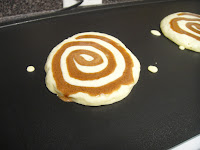 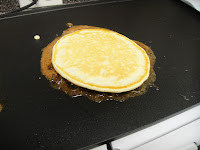 To top it all off, drizzle on a powdered sugar glaze, just as you would with a big thick cinnamon roll.  So delectable!  This recipe makes four fairly large pancakes, but as decadent as they are, that was plenty for just the two of us! 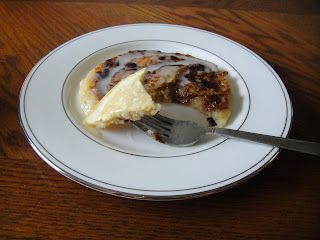 I have some sugary cinnamon-y buttery mixture leftover, and I can’t wait to use it for a late night snack of cinnamon toast (the “right way”).

The original recipe uses a cream cheese glaze, but since I didn’t have any cream cheese, I made a glaze with powdered sugar, cream, milk, and vanilla.

To make the pancake batter, whisk together the flour, baking powder and salt in a medium bowl.  In a separate bowl or measuring cup, whisk together the milk, oil and egg.  Make a well in the dry ingredients and pour in the milk mixture.  Mix just until combined (the batter will be lumpy).  Set aside.

To make the cinnamon filling, mix together the softened butter, brown sugar and cinnamon until well combined. Scrape the mixture into a quart-sized resalable plastic bag.  Snip off a small piece of the corner of the bag and set aside.

To make the glaze, stir together the powdered sugar, heavy cream, milk and vanilla until smooth.  Add in additional milk to reach a drizzling consistency.  Set aside until the pancakes are finished.


Drizzle the glaze over the pancakes and serve immediately!

(Recipe adapted from Recipe Girl)
Posted by Unknown at 4:41 PM

Email ThisBlogThis!Share to TwitterShare to FacebookShare to Pinterest
Labels: Breakfast