These cupcakes were awesome. Or so I hear. Actually I hear they were “flippin magical.” But I wouldn’t know. You see, I am allergic to cocoa and have been all my life. But since many people in my life love the stuff, why would I inflict my chocolate-free lifestyle on others?  So when my sister visited this weekend and we made cupcakes for a little spring fling, we made a batch of vanilla cupcakes (for me) and a batch of these little chocolate beauties. 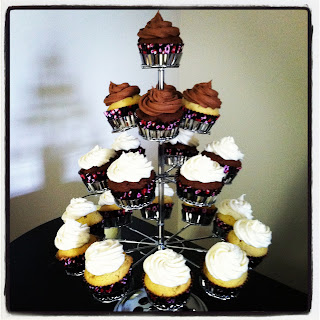 The recipe for the chocolate cupcakes is from Dorie Greenspan’s Baking: From My Home to Yours and includes cocoa powder and melted chocolate. Then, we added some chocolate chips just for fun. Why not? And while Ms. Greenspan’s chocolate glaze sounded delightful, I tend to prefer mountains of frosting on my cupcakes, even when I am not the one eating them. I suppose I express my love through frosting.


Since there wasn’t quite enough vanilla frosting for all two dozen cupcakes, I decided to whip up some chocolate frosting to finish off the bunch.  This is the recipe I included below, because I hear it tasted pretty good. With butter, sugar and chocolate, how could it not? 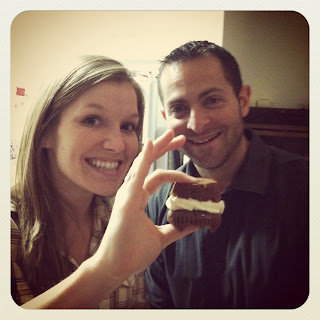 As we enjoyed the last of the cupcakes, we got a lesson in the proper cupcake eating technique from my sister Stacy (the future dietitian by the way) and Bradley Cooper’s doppelganger. What do you think? I say they’re delicious however you eat them!

Center the rack in the middle of the oven and preheat the oven to 350 degrees F. Line a cupcake pan with paper liners and set aside.

In a medium bowl, whisk together the flour, cocoa powder, baking powder, baking soda, and salt. In the bowl of a stand mixer, cream the butter and sugar until light and fluffy. Add in the egg, egg yolk, and vanilla, mixing for one minute after each addition and scraping down the sides of the bowl with a spatula as needed.

Divide the batter among the paper lined cups. Bake in the preheated oven for 22 to 25 minutes or until the tops of the cupcakes are springy to the touch and a skewer inserted into the center of a cupcake comes out clean. Allow the cupcakes to cool or a couple of minutes before transferring to a wire rack to cool. Allow to cool completely before frosting.

(Recipe adapted from Baking: From my Home to Yours by Dorie Greenspan)

In the bowl of a stand mixer fitted with the whisk attachment (or using a hand mixer), beat the butter until light and smooth. Gradually add the powdered sugar until well incorporated, 1 to 2 minutes.  Add the melted chocolate and vanilla. Beat the frosting for another minute or so until fluffy. Scrape frosting into a piping bag or Ziploc bag with the corner snipped off, fitted with the frosting tip of your choice. Generously frost the cooled cupcakes.