Back in December, in the heart of Christmas cookie baking, I made a batch of Marcela Valladolid’s Polvorones.  They were classic Mexican Wedding Cookies – buttery and chock full of walnuts and coated in a thick layer of melt-in your mouth powdered sugar.  When Dan tasted them, he instantly thought of Archway Cashew Nougats, the tasty little treat in the red package only found at Christmas time.  We tried to find them online, but apparently, Archway went out of business, but the cookies are sometimes found at Walmart.
To our (mostly Dan’s) dismay, we couldn’t find them, so I set out to make my own using the Polvorones recipe as a starting point, subbing in cashews for the walnuts.  I went through several iterations, experimenting with one or two tweaks each time - powdered sugar instead of granulated (granulated is better), shortening (non-hydrogenated) for a portion of the butter, and a bit of cornstarch with the flour for a more tender crumb.  Toasting the cashews also gave the cookies a wonderful nutty cashew flavor. 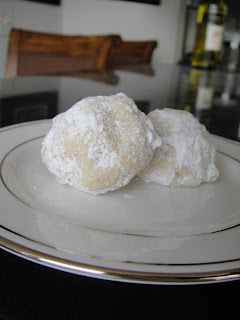 I made some pretty good cookies, but then when we got to Pittsburgh for Christmas, there they were on the kitchen table – Archway Cashew Nougats, found at the Giant Eagle.  Dan probably polished off two packages of them that week, so I knew I had to perfect my recipe for post-holiday cookie enjoyment.  This weekend, I made another batch (to hold up my end of the March Madness bracket challenge) and they are delicious.  Here is my recipe - I hope you like them!

P.S. Today, my little sister, Stacy, got accepted for a Dietetic Internship at Napa State Hospital! I am so proud of her!

Preheat the oven to 325˚F.  Spread the cashews in an even layer on a sheet pan.  Toast for 10-15 minutes, stirring occasionally until golden brown.  Once cooled, grind one cup of the toasted cashews in a food processor until finely ground.  Coarsely chop the remaining cashews and set aside.
Cream the butter, shortening, and sugar in the bowl of a stand mixer until light and fluffy, 1-2 minutes, scraping down the sides of the bowl once.  Whisk together the flour, cornstarch, salt and ground cashews.  With the mixer on low, slowly add the flour mixture until combined.  Add the chopped cashews and mix for another 15 seconds.
Divide the dough in half, wrap each half in plastic and refrigerate for at least 30 minutes, or until you’re ready to bake the cookies.   Working with one half of the dough at a time, roll the dough into one-inch balls and place on an ungreased cookie sheet (use parchment paper or a silicone mat for easy cleanup). Bake at 325˚F for 18 minutes.  Allow the cookies to cool on the pan for about 15 minutes.  Roll the cookies in the powdered sugar and allow to cool completely.  Store the cookies uncovered – they’re even better the next day!
Posted by Unknown at 9:21 PM